If the chart of GDXJ has been read correctly and the pre-market action continues lower, GDXJ is poised for the downside.

Posting a new daily low below 37.71, adds weight to an up-thrust (then lower) condition.

Note the weakness of the prior spring test.  Price action came all the way back down to 35.81, before heading higher to the up-thrust.

The annotated chart of GDXJ (Junior Gold Miner ETF) shows the progression into the latest reversal.

The Force Index, is a summation of market pressure for each leg whether up or down.  Note how upward force in the latest up-leg dissipated as highlighted by the two magenta numbers.

This pattern of fading energy, coupled with reversal can be found as an example of going short the market in Wyckoff’s 1931 manuscript of how to trade in stocks.

If this exact chart set-up is in his text, these patterns are as old as the market itself and they repeat.

With about thirty minutes to go in the pre-market session, GDXJ is trading slightly lower at 36.92, down -0.32%.

The Junior Mining index GDGXJ appears to be in a downward reversal.  Top to bottom has been retraced 38% as shown.  Now, it looks to be in a trading channel as well.

Pre-market activity has the index flat.  The channel has neither been confirmed, or negated by early trading.

Pressing on to a new daily low (below 37.48), will help confirm the downtrend.

It’s been over a month since the last update on GDX.

Price action is following the plan with the move nearing its upside limit at established resistance.

Another good indicator we’re at or near the top of the current move, is the Wall St. Journal.  It came out with a nearly full-page article (Friday, 9/6/19) on the precious metals which have ‘been on a tear’.

If we are nearing a top, the GDX may take a while (possibly months) to complete its reversal. 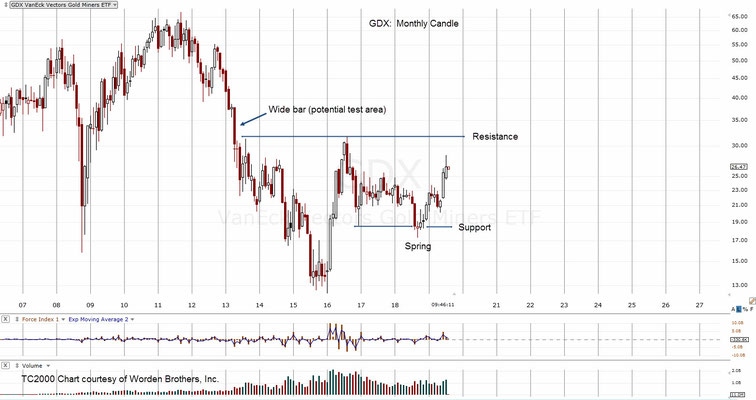 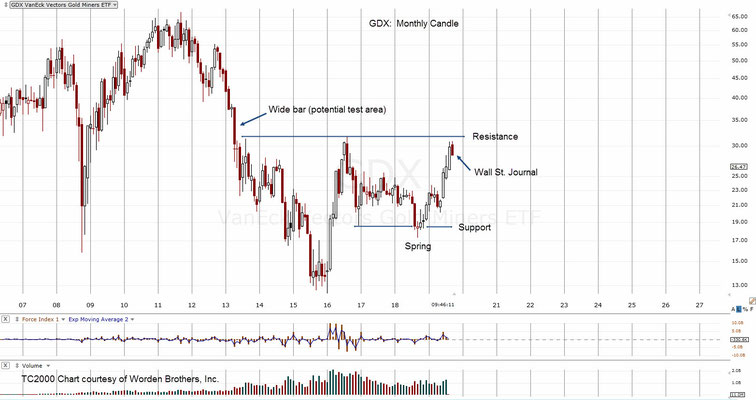 Pulling out to the monthly chart in GDX, we see a slow motion progression from spring to potential up-thrust and possible reversal.

If you know what’s probable on a long term basis, then affairs can be planned accordingly.

The senior gold miner index appears to be marching methodically to test the wide bar as shown.

The launch higher in gold appears to have stalled.  Will there be a test of the wide price action posted during late June?

The 7-Day Candle chart of GLD shows prior wide bars and their subsequent tests.  It’s just natural market behavior to come back (at some future point) for a test of dynamic, high volume areas.

The problem is (for the gold bulls), that if GLD comes back to test, it would move below resistance (now support) and then re-establish that resistance.

That in turn, would solidify an up-thrust condition and portend much lower prices ahead

As sated in prior updates, it’s not gold that’s likely to be the go-to item, it’s food and more specifically, corn.

Here is one link that has good service and prompt (for now) delivery.

As the gold bugs approach Nirvana with the recent $100/oz. blip higher, there may be something else … on a massive scale afoot.

Pulling out to the quarterly chart, we see typical market behavior.  There was a huge bull market from 2001 (or so), to 2011.  That top covered approximately two years before heading decisively lower.

With recent upward action, the wide quarterly bar from mid-2013, is being tested.

What comes next is the important part

There’s a lot more trading action to come in the current quarter.  However, if there’s little upward progress on a go-forward basis, then gold (GLD) might be forming an up-thrust with potential for another leg down … possibly to the $550, area.

What about hyper inflation?  Aren’t we there now?  Isn’t the dollar virtually worthless?

It’s possible that corn, wheat, and other commodities are going to be worth more than gold (for a while) in the near future … more on that later.

Side note:  Ammunition, when properly stored can keep its value and last 50 - 70 years or more.

The price of gold (GLD) is higher and yet the senior mining index, GDX (along with the juniors) is lower.

If gold reverses from here, the entire mining ‘space’ may be in serious trouble … as if it’s not already.

The prior GDX sequencing from spring to up-thrust is clear.  Now the sector may be at another pivot point.

As indicated in the 6/17/19 update, the juniors look to be the most susceptible to lower prices.

Note:  JDST was traded at the GLD danger point from June 14th to the 18th.  The trade was exited during the pre-market session on the 18th for a minor, nine-tenths (0.92) point loss (includes commissions).

Gold (GLD) is posting nearly textbook conditions for a reversal.

There was a failed attempt (last week) to make and hold new highs.  The weekly MACD may be diverging; The possibility for such an event was covered in the 4/24/19 update.

We’re now at the danger point where price action can go either way.  This is the point where risk is least.

Within the gold sector, the most vulnerable to lower prices may be the junior miners, GDXJ.

JDST is the leveraged inverse fund for that sector.

We’ll let the chart speak for itself.

The attached link is a presentation on “why” silver will move higher; the arguments are all fundamental(s) with no charts on what silver is actually doing.

At this point SLV has broken lower out of a wedge, tested that breakout and is now moving (albeit drifting) lower.

It’s interesting that both the Fibonacci projection taken from the April, 2011 highs, and the measured move out of the wedge coincide.

Silver at $11/oz. is lower than (projected) production costs of First Majestic Silver (AG) for 2020.  What’s going to happen to its stock price if/when silver reaches that level?

There has been one attempt at a spring in gold and one failure.  Now, we have another spring attempt as shown on the chart.

When a scenario does not work out as expected, something else is happening.

Are we in a bullish set-up, a trading channel or both? 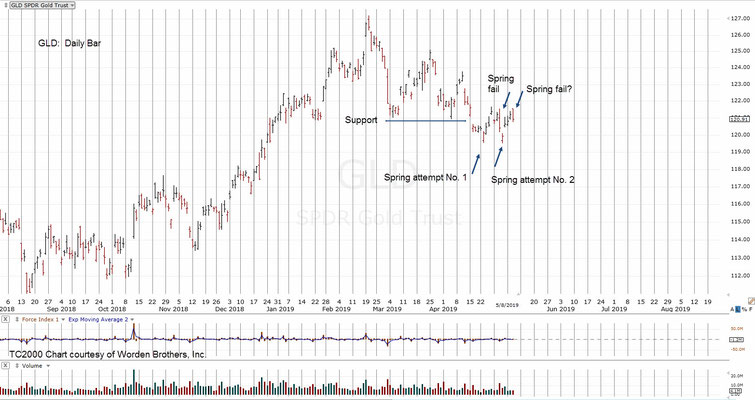 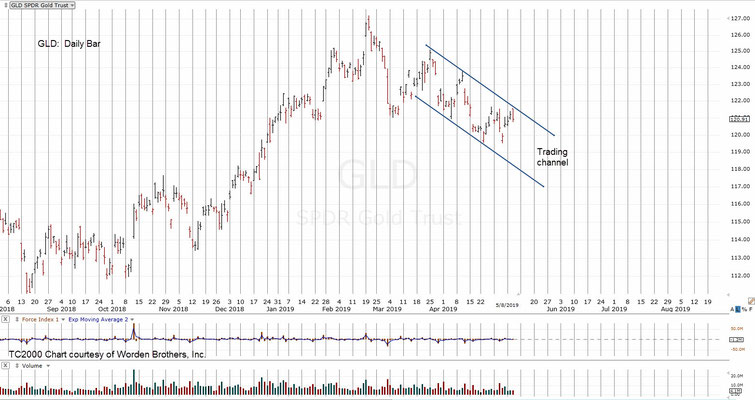 Looks like gold (GLD) is set to have some kind of rally.  The character of the spring set-up is more labored than previous action so it may not be as dynamic.

Note how long price has remained below support; about four times as long as prior moves.

Back in the old days with Middle East tensions rising, gold and silver would be trading in a brisk bull market or at panic levels.

We'll see what happens at the open on Monday.  If you want to check silver futures markets opening late Sunday, click here.

Meanwhile, here’s another potential (not a forecast) for silver.  The last update showed a breakout from a wedge that’s actually within another, larger wedge.

We’ll let the chart speak for itself.

The attached link is a presentation on “why” silver will move higher; the arguments are all fundamental(s) with no charts on what silver is actually doing.

At this point SLV has broken lower out of a wedge, tested that breakout and is now moving (albeit drifting) lower.

It’s interesting that both the Fibonacci projection taken from the April, 2011 highs, and the measured move out of the wedge coincide.

Silver at $11/oz. is lower than (projected) production costs of First Majestic Silver (AG) for 2020.  What’s going to happen to its stock price if/when silver reaches that level?

The short answer is yes.  The long answer is we’re probably not going to trade the upside.

The weekly chart of GLD has it in spring position.  However, if there is a move higher and if that move reaches new highs, there’s a possibility a bearish MACD divergence will be created.

Note the previous bearish divergence on the chart.  The result was a huge move in GLD; a collapse of 18 – 24 points depending on the point of measurement.

During that move, GDX was shorted using a series of put options.  A detail of that trade is here.

If GLD moves higher, what’s more likely from my firm’s standpoint, is to monitor price action and observe the behavior if/when there is a breakout to new weekly or monthly highs.

GLD is trading higher in the pre-market session and validating the spring set‑up.  Currently, we’re at 120.79 (+0.35%) which puts GLD above the highs of the past three sessions.

Price action still remains below the 121-resistance area.  However, we may be at the point to expect a rally above this resistance and potentially move sharply higher.

We’re at the danger point

There's also a wedge pattern as shown.  If this pattern is in-effect (viable) and GLD rallies from here, the measured move is in the vicinity of 130; or approximately $1,375 in the spot market.