Wheat prices look to be accelerating higher.  WEAT fund is capturing some of that move.

If the trend-line remains intact, WEAT is moving higher over 490%, annualized

Largest one-day volumes ever, for CORN suggest a long term pivot (to the upside) is at hand.

Price action is expected to test the support zone as shown.

The corn futures report at this link, shows current progress is lagging behind last year.  At this point, 11% of the crop is mature vs. 24%, on average.  That’s down over 54% from last year.

In addition, Ice Age Farmer just released this report, indicating northern growing areas no longer have enough (and won’t get enough) ‘heat’ to mature the crops … it’s going to be a huge loss.

The previous update has shown actions taken to keep the futures prices of corn down … even pushing below the lows of mid-May.

In effect, CORN may be looked on as a panic indicator.  As long as it stays under control, the masses will go on, oblivious to the structure being removed beneath them.

It’s not unlike late in 2008, when the day after the presidential elections, firearms ammunition just ‘disappeared’ off the shelves.  Prices skyrocketed 300% - 500%, or more on what was available if you could find it.

Back then, I was completely immersed in my work and in the process of building the engineering department (Software, Systems, and Flight Test) for an autopilot firm.  I’ll admit, I was one of those “oblivious”.

Never again:  That experience made me realize things had changed.  Shortages of everything, on a go-forward basis were a real possibility.

So it is with CORN.  As long as the price remains under control, there’s still time to prepare and position.

My firm is not looking to position in CORN itself, but using it as a proxy for public sentiment.

How Does The Market Know?

How did the ‘commercial’ corn futures traders know, on a collective basis, to go short corn in late July; anticipating a significant price decline.

Why is the average investor, speculator jumping into a sure thing (higher prices), then scratching their heads and losing their shirts as corn futures go “limit down”.

Going back to Wyckoff, he states (paraphrasing) that ‘someone always knows something and it’s on the tape’.

Beginning at time stamp 11:09 in this video is what commercials (as a combined group) may have known before it became public knowledge.

Then, there’s our forecast (scroll down) from the 8/8/19, update released a month ago:

"For now, since everyone that’s awake is watching corn prices and getting in for a sure thing, we’ll stick with a move to test the 15-area and even a gut-wrenching, manipulative push below the lows set in mid-May."

So here we are; below the lows set in mid-May.

If you are an independent financial adviser or planner, our analysis of the corn market (and specifically CORN) may be in complete contrast to what's provided through your ‘partnered research firm’.

If so, that’s good.  You get to compare what a well-heeled, staid entity concludes as opposed to the raw reality of real-time chart analysis and tape reading.

The updated chart of CORN shows we’re near the measured move target.  Such analysis indicates potential and not fact.

CORN is being squeezed.

CORN may get to the forecast lows or not.  From a trading-investing perspective, we’re leaving the complex (manipulated) corn situation alone and focusing on coal. 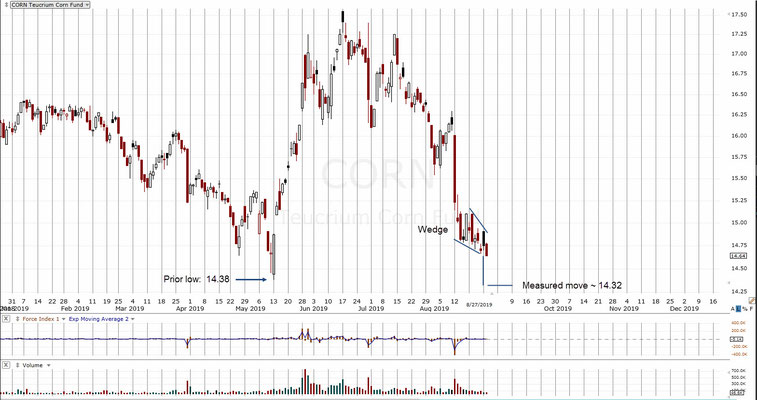 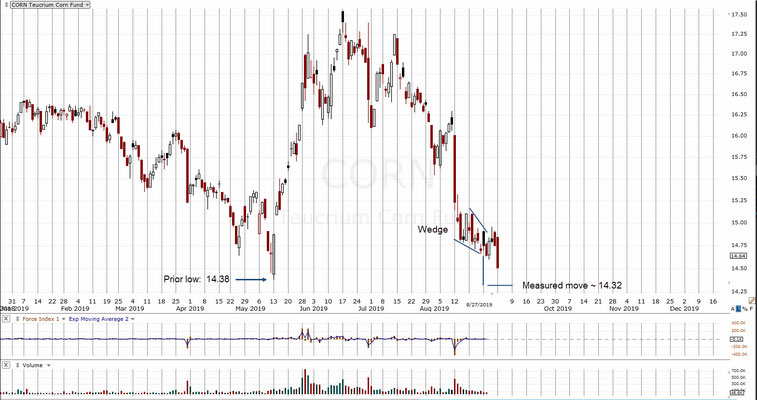 Wedge breakdown may be in process.  If so, measured move projects new lows for the year.

The August 8th update of CORN showed a potential wedge test, reversal and then measured move.

So, here we are at the measured move target.  What now?

At this point, we all should know that ‘anything can happen’.

However, since price action is being interpreted correctly thus far, the most likely move would be a congestion area … possibly a slight rise before an attempt to push to new lows (around the end of September).

That push (should it occur) may or may not be successful.  The early freeze in the mid-west could come sooner than expected or not at all.

We’re monitoring CORN as a proxy for the commodities markets and personally I’m not sure if a position is warranted.  The vehicle requires too much capital for the potential return. 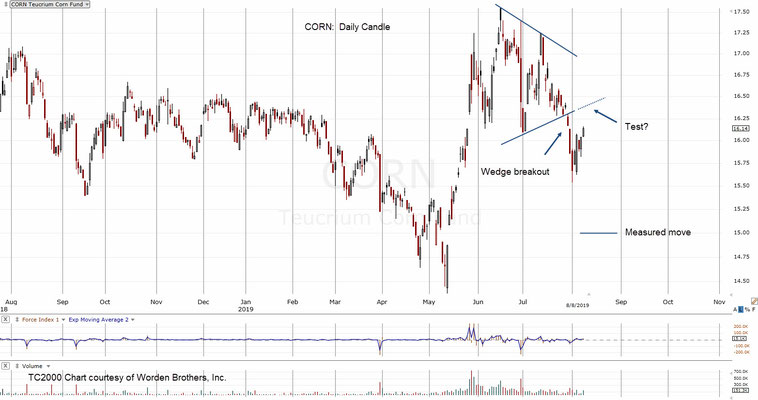 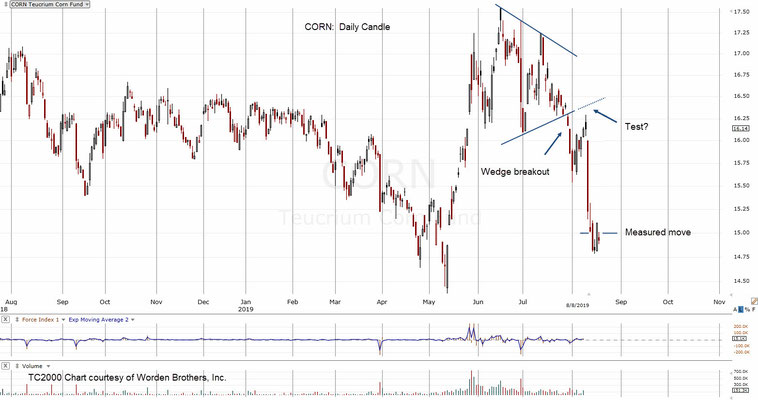 Andrew's Pitchfork is a tool that can be used to forecast a trading channel based on prior trend activity.

CORN has been updated to show rendering of possibilities if it remains in the fork channel.

If CORN is going to push below the lows set on May 13th, the pitchfork pattern forecasts a time-frame within the last week of August to the second week of September.

CORN broke down out of its bearish wedge and may be coming back up to test.

Going way back to Wyckoff’s writings and market instruction, he states when there’s a decisive breakdown with volume, typical market behavior is to mount some kind of rally to test the break.

That may be where we are now.  At the same time, CORN has penetrated support (formed early July) and is spring position … not unlike natural gas.

So, which is it?  Spring, or Wedge breakdown and test?  Guns or Knives, Butch?

We’ll let the market decide.  For now, since everyone that’s awake is watching corn prices and getting in for a sure thing, we’ll stick with a move to test the 15-area and even a gut-wrenching, manipulative push below the lows set in mid-May.

If that happens, we’ll expect to see the ‘commercials’ go long at record levels.

Remember, the USDA has a couple of misleading reports it can generate before the crop failures can’t be hidden any longer.

There’s absolute proof located here, that agriculture is not going to be the same on a go-forward basis:  Starting now.

While the pubic remains distracted by Cramer’s latest prediction on ‘buy the dip’, it’s not the S&P that we should be trading but the basic building blocks of existence.

That might sound extreme … but we’ll see come this November and December.

From a strategy standpoint, it looks like natural gas first then corn.

First there’s the ‘commercials’ that at last report, were heavily short the market.

Making sense of their stance had me scratching my head.  I exited my own long position nonetheless based on that information and then, there's this interview.

Important time stamps are below:

Now, it becomes clear the ‘powers that be’ will likely do whatever is necessary to keep the lid on corn prices so the overall public does not notice … until of course it’s too late for them to respond.  The commercials (current) short stance makes more sense.

We’ll see how that goes.  In the meantime, the chart of CORN shows a potential test down to the 15.00 area resulting from a break lower out of a wedge.

The report at this link has the ‘commercials’ short futures contracts (anticipating lower prices) at near record levels.

The commercials are the ones in the business day in, and day out.  They know their product. The ‘speculators’ are on the opposite side.

Another example of commercials being short at record levels, was the gold market sell-off from July to December, 2016.  The commercials are to be taken seriously.

Note:  The senior gold miner index, GDX was traded for huge gains during this time.  Documentation of that trade is here.

How can it be that corn prices can go stratospheric as result of crop losses and at the same time, have the professionals counting on lower prices?

This is the way of the markets and why the ‘fundamentalists’ are absolutely lost when attempting to explain such moves.

We’re at the juncture of support (upward channel) and a down-trend line.  If too many speculators have jumped on the ‘higher prices’ bandwagon too early, the market is self correcting.

It will flush out those speculators and potentially reverse with a vengeance, heading higher after all have sold-out.

If CORN breaks lower, we have confirmation the upward trading channel is no longer in-effect.

Building a position in the corn market may be a mid-to-long-term, strategic move.

There’s a lot going on at this point and so far, conditions (for trade entry) are still calm … sort of.

There are ways to get positioned strategically and CORN appears to be one avenue.  Link to more information is here.

This is NOT a recommendation.

On June 28th the latest UDSA report was released on crop conditions for corn.

“Better than expected” was the market's assessment.  Price of the commodity was slammed hard after the release; A huge move from a futures perspective.

However, the truth as always, takes a little digging.  Here is a link to a more level headed view.

CORN has been trending at +130%, annualized since the May 13th low.  Noted on the chart is a possible pivot point on Tuesday, 7/16, where CORN may have increased its trend to approximately 380% annualized.

If the next session opens higher and moves to make a new daily high, we have tentative confirmation of trend acceleration.

There's been much speculation over the years since the 2009 lows, as to what will trigger the next major down trend or ‘collapse’ as it’s labeled.

All eyes have been focused on Deutsche Bank as the most likely candidate to initiate such an event.

How about a world wide shortage of food and specifically corn?  Those gold and silver ‘stackers’ may be liquidating their assets just to eat.

Lack of current and future corn has spiked the price over the past two months.

At this point, it’s well known that 1/3rd of the U.S. crop was not planted or planted late.  There is no assurance that what has been sown will yield at harvest time.

The chart of CORN, a commodity tracking fund looks like it might be trending or about to trend after its price spike in late May, early June.  We may be at the start of a long term, multi-year shortage of all U.S. agriculture based commodities.

A typically commodity bull market rises slowly at first and then presses ever higher into a blow-off top.  Recall the gold bull market and price spike to $850/oz. in 1980.  It was 28-years before gold returned to that level.