10/21/18:   Price action formed a wedge over several trading days after a significant thrust lower.   An 'inside day' indicated the potential that upward correctives moves were at completion.  No fundamentals or statistical data were used for trade entry other than what price action was saying about itself:  Probability for a move lower is high. 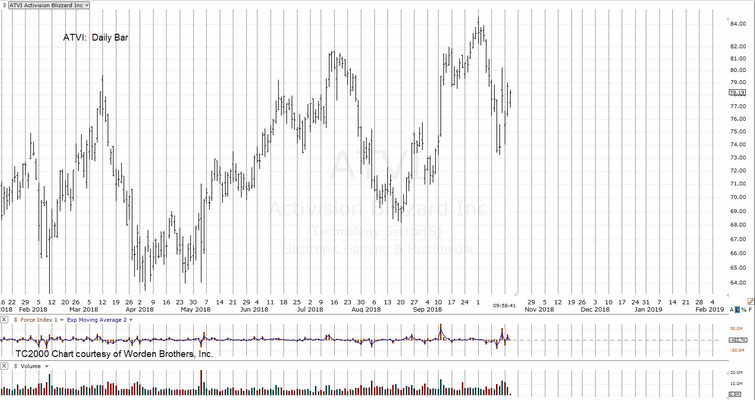 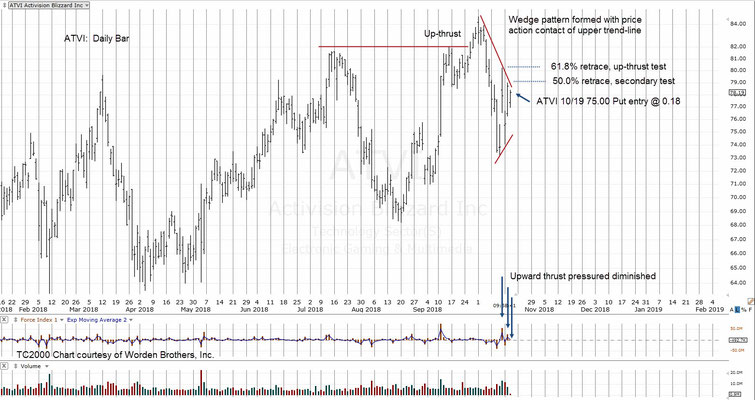 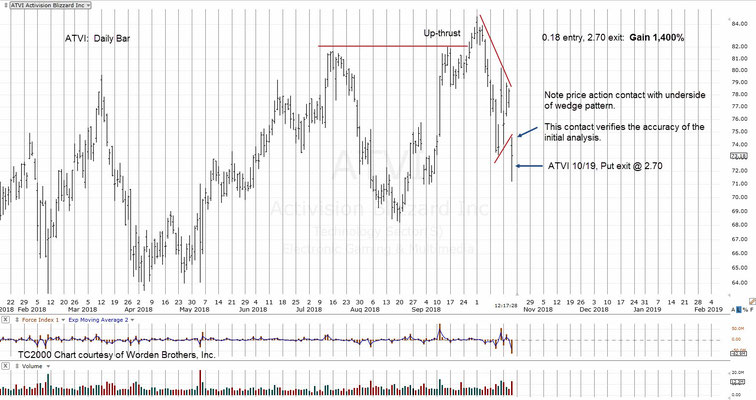 Wednesday’s price action in Chevron posted a reversal bar with a slightly higher close than the prior session.

Thursday morning saw the opening in CVX gap lower into the prior day’s range; a gap that was determined in real time to be too low. That lower open put probabilities of a reversal failure on the table.

The trade was executed just seventeen minutes after the open at 10:47 a.m. EST.  Price action made its high just five minutes later.  The prior day’s reversal bar began to fail.

Once price action broke below the prior session low, it began a relentless decline into the close.

A trading channel was observed on the hourly chart of CVX (not shown) and the decision was made prior to the open today, on Friday to exit the trade based on price action.

That exit occurred just two minutes after the open as price accelerated lower into the hourly channel.

With the earnings report out of the way, GM (along with the entire auto sector) can continue with its on-going implosion.

Note the “evidence of a struggle”, a move lower, earnings release on 4/26, which failed to have any material effect; GM is in position to move decisively lower.

The daily chart shows our entry.

No indicators, no moving averages:  Just price-bar and volume (Wyckoff).

The exit is detailed in a separate update.

Trading options during the week of expiration, requires that probabilities are lined up for an immediate move.

GM performed very well in this regard.

Real time tape reading, a measured move projection (not shown) were used to identify an exit near the session lows.

The hourly chart of MYL details the put activity over the past two sessions.  Entry was made on Thursday the 22nd and exited on Friday as price action neared support levels.

MYL continued on through support and closed near the low of the day.  That price action now puts MYL in spring position (closing below support).

Monday the 26th, could see an attempt to move higher.  The overall (monthly, weekly, and daily) trend remains to the downside.  Rising price action in a downtrend may give us another opportunity to position short.

The IBB Put option trade is a good example of why downside action is preferred.

While option calls may net a few hundred percent gain as in the GLD trade… puts are a different story altogether.

Understanding where one is in a price move is critical.  On February 8th, the down move in IBB does not appear to be finished.  Price action over the prior two sessions rebounded modestly and appears to be in a stall.

Action moved sharply lower during the 8th and the early part of the 9th.  Real time tape reading was used to determine that we’re at an extreme and the trade was exited (with over 1,000% profit) mid-session as shown.

No more than a few minutes later, IBB began an upward move that ultimately culminated in a 105.67, close for the session.

Had the IBB put been held into the close, it would have expired worthless.

Even though the overall view of gold is bearish, that does not mean there're not opportunities to the upside.

Opening gap-lower on Thursday 3/1, penetrates prior support and puts GLD in spring position (if only temporarily).  All hope is lost for the GLD, 3/2, 124.00 Call as there's only one day left to expiration.

Action:  Buy-to-open during the early part of the session at:  0.41.  At the close, price action had formed the expected reversal.

No news or market information of any kind was consulted to aide the trade decision; only the fact that when support is penetrated, the market will make some kind of attempt at a spring.

The following days may see continued upside in gold (GLD).  However, unless price action warrants, our view is still bearish.